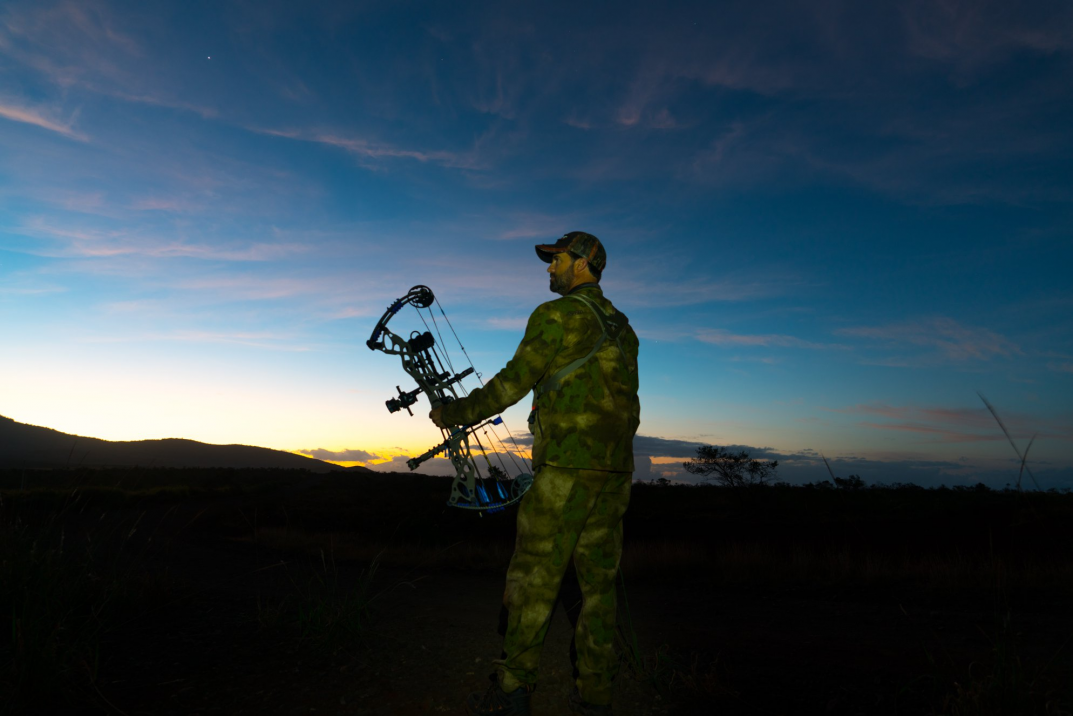 It was early August on the Hawaiian island of Lanai. I’m with my good buddy Randy, his son Gatlin, and our guide Alec for a three-day Axis deer hunt as we labored over maps and strategized our hunt for Hawaii’s most coveted big game species.

Spot and stalk hunting for Axis deer in Lanai is simply tough. In many circles, they are regarded as the most challenging big game animal to get within bow range. This is partly because Lanai’s Axis deer have no other predators other than the human hunter. Through generations of hunting pressure, these deer have learned how to evade hunters.

Luckily, it’s not uncommon to encounter as many as 50 Axis deer a day when hunting in Hawaii. They were introduced from Asia in the and flourished on the landscape. Now, their booming population grows at a rate of 20-30% each year.

While I was sure we’d have plenty of opportunities at seeing deer on this trip, I knew closing the distance was going to be difficult. To pull off a successful spot and stalk, I knew I had to be precise in my movements, slow in my approach, and aware of the wind.

On day one we glassed a bachelor group of bucks in thick brush. With the wind in my face, I stalked slowly into position. I found a grove of bushes and tucked in close behind them. A trophy buck was bedded down just ahead and it was within archery range.

I waited for the opportunity at an ethical shot. After 45 minutes, the buck finally stood broadside. I made my move, drew back, and locked into my anchor points before releasing an arrow. It was a tough shot on a big buck, and when the deer took off, I knew it was a clean miss. We headed back to camp, empty-handed yet undeterred, to prepare for the next day.

Spooking an Axis deer on a failed spot and stalk attempt runs the risk of setting off a chain reaction. When one deer barks, so every other one within earshot, and they all bolt in opposite directions, spooking even more deer. This can make for frustrating hunting conditions. But it also presents a challenge to the hunter that’s hard to replicate anywhere else. In part, this is what makes the challenge of hunting Axis deer so alluring.

The next morning, we returned to the field with high spirits and renewed confidence. A bluebird day with low and steady wind. There plenty of Axis deer on the Lanai landscape. It’s just about waiting for that right opportunity. We hiked all morning without finding a chance to redeem ourselves. Then, by late afternoon, we found a large herd of bucks and does and were able to creep within 40 yards of them.

Daylight dwindled without a shot opportunity. Just before dark, we had to call it a day. We head back to camp for one more night of rest before the last day of our hunt.

One of the beauties of spot and stalking Axis deer in Lanai is the weather. It’s a far cry from chasing late-season elk in Montana and would put you more in the mind of spring turkey hunting with daytime temps reaching into the 70’s and 80’s. It’s t-shirt weather, and that helps a lot when you’re trying to cover a lot of ground on a spot and stalk hunt.

There is usually wind on the Hawaiian Islands and keeping the wind in your favor is a must.  Sometimes you may need to put on many more miles to get into position but make the wind your friend, not your enemy.  Do your best to stay as scent free as possible, but playing the wind should be your priority. In Lanai, where a spooked Axis deer will run away seemingly forever, keeping your wind right is a huge factor in finding success. Dressing comfortably in quiet clothing allows you to move freely without much risk. Next to scent control and playing the wind, the greatest enemy when stalking a big game animal can be the unnatural sound of fabric on fabric friction, the scraping of clothing on bushes, or even squeaky boots.

The next day I headed to a new spot where we saw a lot of deer. After we surveyed the land, a final spot and stalk was planned, this time with Alec by my side.

It isn’t long before we move in on a group of bucks. The wind is right, and a trophy Axis deer stood at 66 yards. I am comfortable with the shot. I stand up, pull back on my bowstring, and sail an arrow just over the buck’s spotted flank. A little lower, or if they buck hadn’t dropped as the arrow got close, and it would’ve been in the sweet spot. These are spooky critters.  Much like hunting the hyper-alert whitetails in Texas, you should concentrate on aiming for the heart.  If they drop, you’re still in the lungs and if they don’t, you’ve still hit the heart.  I failed to remember that on this buck and I was hoping for another opportunity, but it’s the last day of our hunt and were forced to call an end to our Axis deer adventure

The Hawaiian landscape offers boundless outdoor opportunities, and although I wasn’t able to fill my Axis deer tag, Gatlin was able to fill his. On our final day in Lanai, we head offshore for a productive day of fishing and return to camp for a delicious backstrap dinner from Gatlin’s Axis deer, bidding Lanai, and its coveted herd of Axis deer, a final farewell.