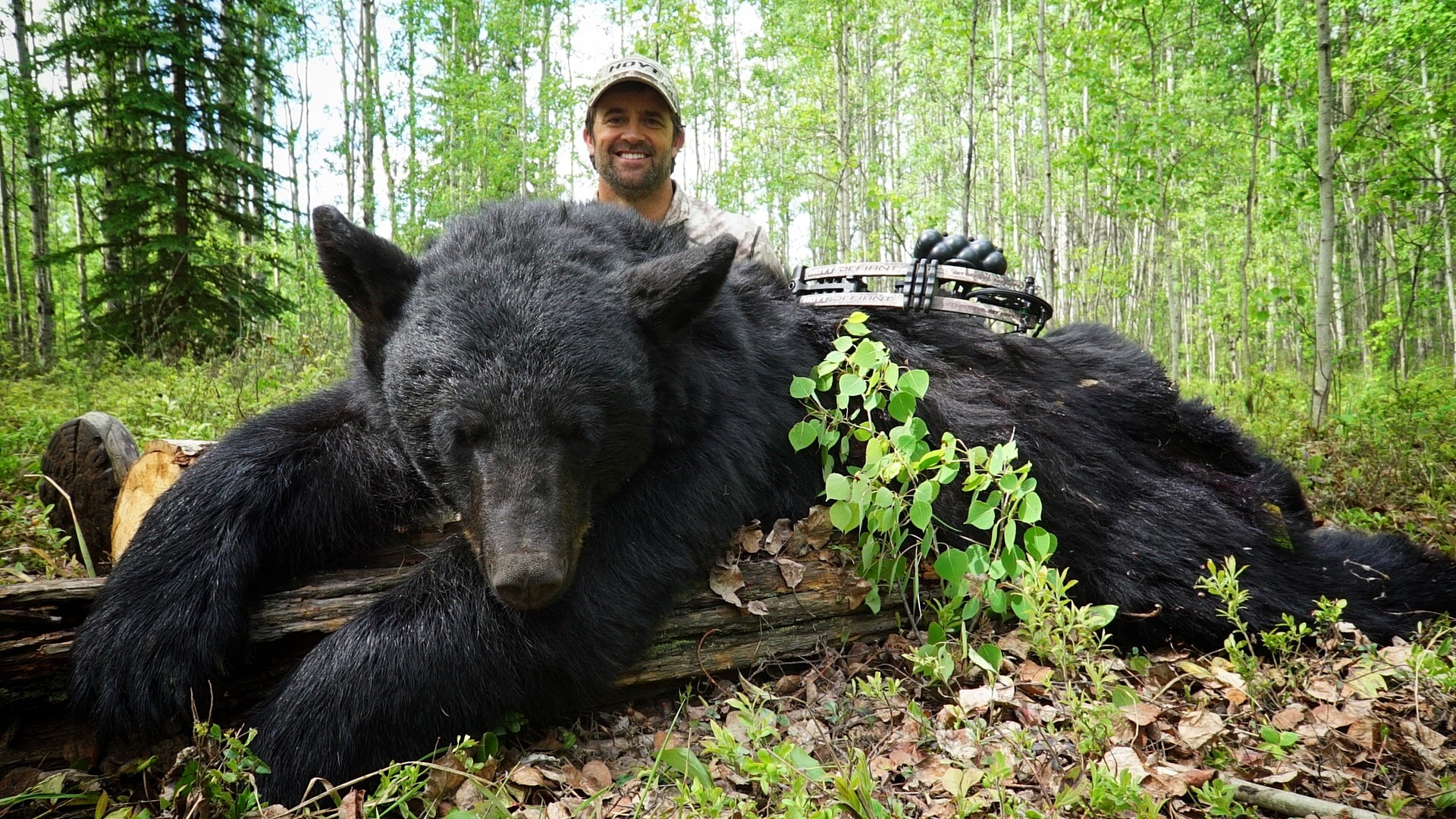 Ranging from Maine to Alaska, the American Black Bear is the most widely distributed bear species in North America. Black bears can be found in the heavily wooded timber tracts of the North East, the smokey Appalachian region, the oak country of the Ozarks, the pine forests around the Great Lakes, across the Rocky Mountain Range, and along the coasts and many other parts of Alaska. Black bear hunting offers big game hunters a remarkable challenge and the opportunity at a marvelous hunting adventure. 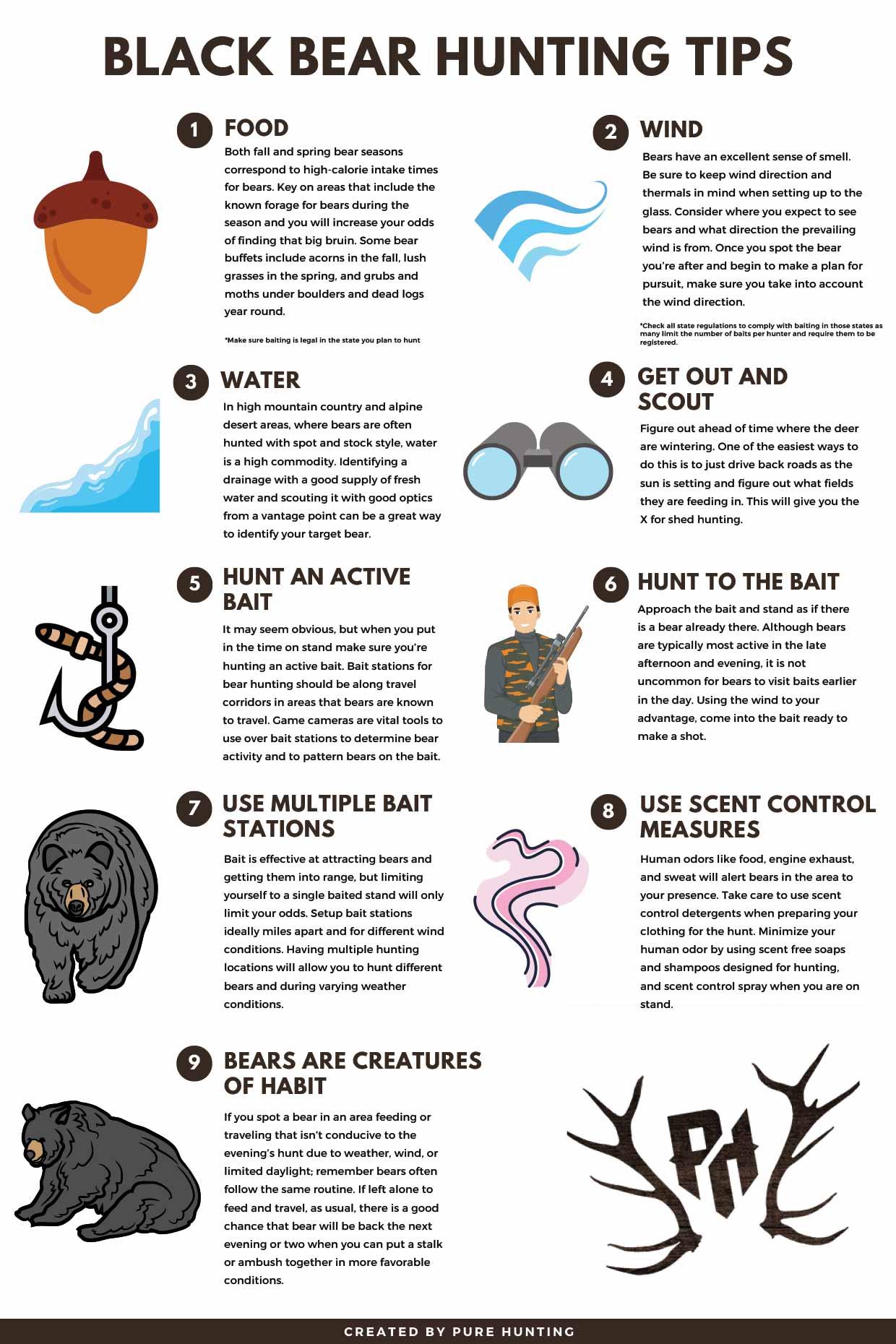 Black Bear Hunting Tips Infographic created by eBikeGeneration  ~  Click on the above graphic to view/save a PDF version to your device.

Bear seasons across the United States and Canada are open during various times including fall, right before hibernation, and spring, right after bears emerge from their winter slumber. Not all states offer both spring and fall hunts, and regulations vary widely from state to state. When it comes to bear hunting there is something for everyone. Black bears, with such a wide and variable habitat distribution, offer many styles of hunting. Terrain, local bear population, tradition, and other factors come into play in regards to hunting techniques and tactics for a given area. More often than not state regulation in the state/Canadian province you choose to hunt in will often dictate the approach and execution of the tactics for your hunt.

Colorado has a healthy black bear population. In fact, many reports show that there are more bears than the state biologists would like to see. However, even with a higher than optimal density, the state only offers a fall bear hunt and does not allow baiting or hunting with hounds. The only option is hunting spot and stalk, which is my favorite style of hunting.

It is very easy to draw tags in some areas of the state, while others, like Unit 61, where I hunted a few years ago, may take several preference points to draw. In addition, some areas that are over the counter have caps or a specific number of licenses available on a first-come, first-served basis. This year those are available starting at 9:00 am on August 9th, both in person at a licensed agent, CPW office or online. In order to participate in these licenses with a rifle, you need to have a deer or elk license in the same unit during the same time frame. Many licenses are either sex and you can shoot a sow, but you cannot shoot a bear accompanied by cubs or shoot a cub less than a year old. Be sure of your target and make sure no little black fur balls are hidden from view before taking the shot.

By not being able to hunt with hounds or over bait, to increase your odds, you should really do some scouting to figure out where the bears are in your unit. Finding an area with lots of scrub oaks dropping acorns is a good place to start as well as water holes in the early season when it is hot. If you happen to talk to a deer hunter or elk hunter who has killed an animal, they may be willing to give you the coordinates of their kill site and hunting around the gut pile can prove productive and is not considered baiting.

It took me a few years to draw this Colorado bear tag in unit 61. Chris and I both drew this tag and we headed out with high hopes since we knew the bear density and the area since Chris had hunted elk in it a few years ago. I’ve hunted a long time but never had the experience I had while on this hunt.

Across the wide open spaces of the Western mountain states like Colorado, spot and stalk hunting is a great way to punch your bear tag. Using elevation and vantage points, hunters can scan likely bear habitat in the late afternoon and evenings when bears are most active. Keep these tips in mind when glassing big country for bears. 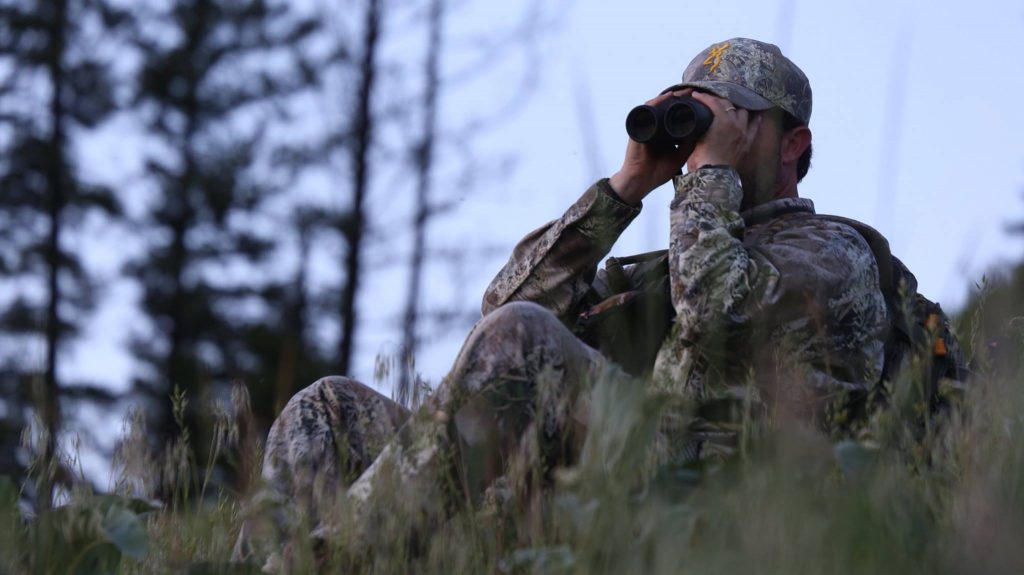 I was fortunate to have been invited by friends who regularly hunt Idaho. They register and set up their own bait areas. Although I did try some spot and stalk hunting, I did not come across any bears using this method, and spent more time sitting over two of their baits. They utilized trail cameras to see what bears were frequenting those baits and tried to pattern them to increase our odds.

One of the tactics we used was to “smoke” the area when we first arrived to the bait site. We used a jet boil or other camping stove and heated up a mixture of honey and liquid smoke, which put a fair amount of sweet smelling smoke in the area. This was not always effective, but I am confident it did bring at least one bear into the bait about 30 minutes after I smoked the bait area.

On of my hosts used a combination of spot and stalk and sitting over a bait. He is a die hard bowhunter, and would sit down wind about 100 yards from the bait. When a bear came to the bait, he would stalk to within bow range while the bear was on the bait and shoot it from the ground.

I’ve had went black bear hunting a couple of times, but have yet to bring one home. For this bear hunt, I’m going along with Santino Castellanos as we join Dan and Rod Staton in Idaho. We’re staying at their family cabin and hunting with bows and rifles on the baits they maintain on land that is available to anyone. Hopefully this year I’ll get my first black bear while Idaho black bear hunting!

A common method for hunting black bears in heavily wooded and thick country is over bait, where legal. Bears have an incredible appetite and coupled with their amazing sense of smell they can be baited into tree stand and ground blind setups. Many times the timber tracks of the North are too dense to accomplish any type of spotting past fifty yards. If the area is an acitve logging area or has recently been logged, clear cuts and the reprod areas are good spots to spot bears. These heavily forested areas are fantastic bear habitat, and are successfully hunted over bait. Keep in mind, sitting over bait is not a guarantee to fill your tag, follow these tips to increase your chances on the stand. 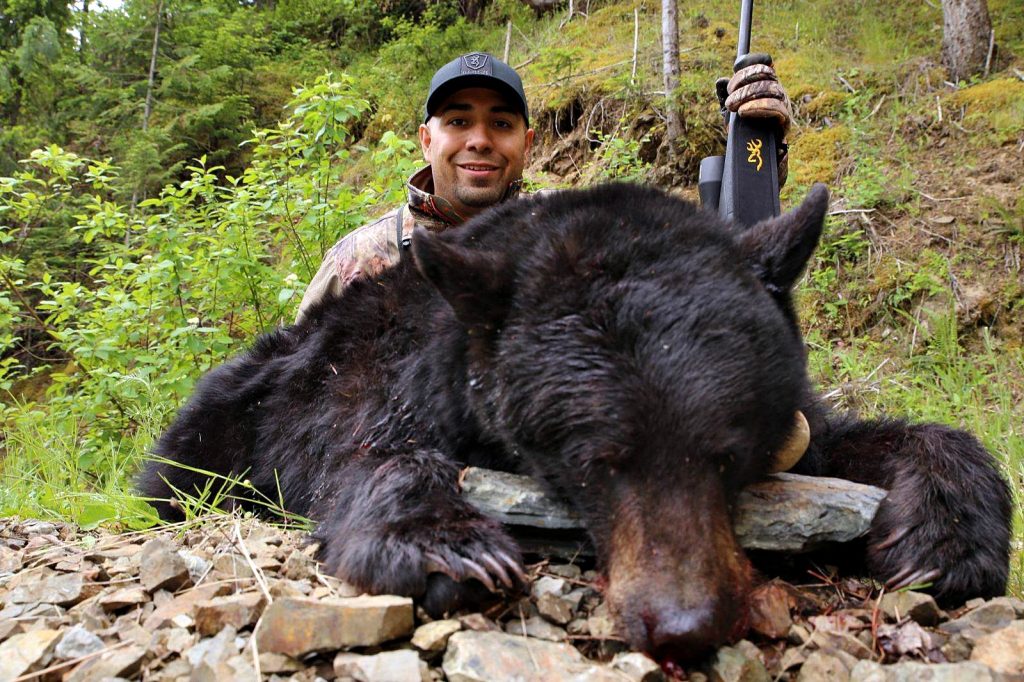 Hunting Coastal Bears from a Boat

This is one of my favorite ways to hunt bears. We were dropped off at a camp with tent, food, boats and motors and left to hunt on our own for 5 days. The adventure of cruising the coastline in a small boat, glassing for bears and trying to get in for a shot is a ton of fun! I have been on two of these hunts and have seen multiple bears on both trips. Paying attnetion to the tide charts is critical, not only for figuring out when the bears will likely be on the shores eating the fresh green grasses and kelp, but also in monitoring your boat. You can end up with your boat in water too deep to retrieve it without swimming, or having it beached 100 yards or more from shore, making it difficult to get it back into the water until the tide comes up. Some areas of coastal Alaska have a tide of over 20 feet!

On my first hunt we stopped and glassed what we thought were bears many times, looking at dark “holes” under trees. When we finally saw our first bear it was obvious it was a bear. Don’t stop looking at every dark object you come across, but it was amazing to me how obvious a bear was when we saw them.

The weather in Alaska can be challenging and you need to be prepared for the worst. Be prepared for it and understand that 50 or 60 degrees can change to the 40’s with wind and rain very quickly. You can get hypothermia very quickly and the dampness makes it feel colder than the temperature really is.

Covering bear country in the coastal waterways of the Northwest by boat is a proven method to locating bears for a spot and stalk hunt along the coast. The coasts of the Pacific Northwest from California, north to Oregon and Washington, all the way to British Columbia and into Alaska are prime black bear hunting grounds. Though illegal to shoot from the boat, floating these areas either by paddle or motorized skiff is a fun and fantastic way to cover territory and scout for bears in a spot and stock scenario. Once you identify the bear you’re after, land your craft to pursue the bear on shore. Floating through bear country is not a “gimmie” at a trophy bear, there are some tactics to remember when pursuing bears from the water. 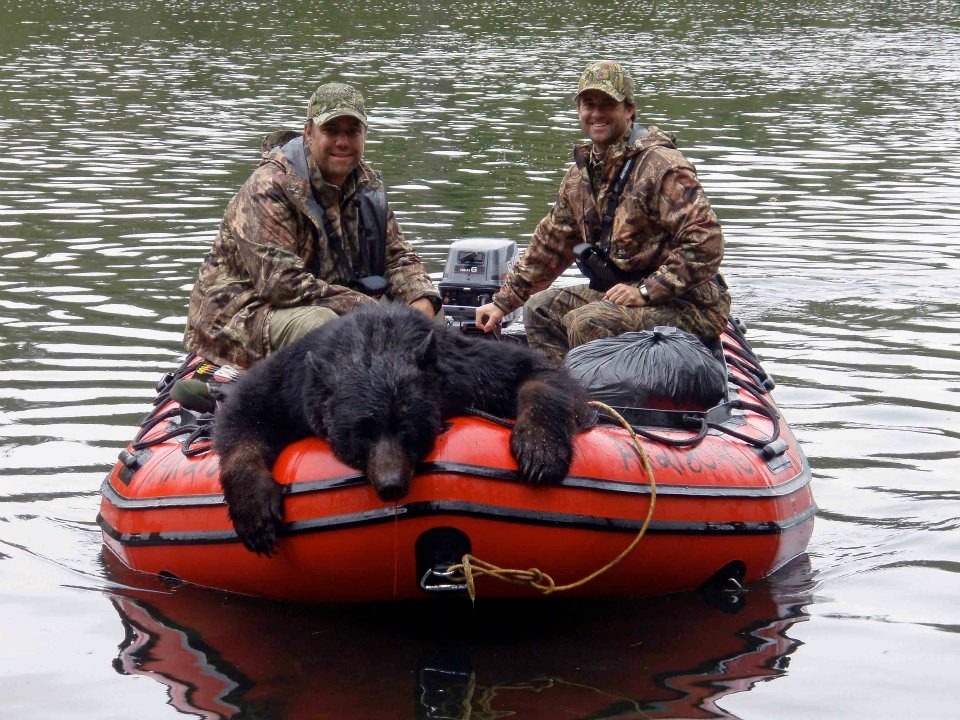 Chris Nowak finally drew a black bear tag in Wisconsin. He has anxiously been waiting for this tag and the opportunity to hunt his family’s old property where he grew up hunting. Wisconsin black bear hunting is a draw only opportunity. Here is more information on Wisconsin bear hunting: https://dnr.wi.gov/topic/hunt/bear.html

Bear hunting gear is very similar to hunting other species. Good quality optics, layered clothing for changing weather conditions, and a good skinning knife are essential. These are large predators, so having a firearm to follow up on your game, as well as protection while in the field can be essential. Bears are most active during the latter part of the day so make sure you have a good head lamp and/or flashllight with you as you may be following up on a bear after the sun goes down. A lot of bear hunting is done at a time of year when bugs are out so using some sort of insect replellant or Thermacell can keep these little bloodsuckers at bay and let you enjoy your hunt more, especially in Alaska. As previously stated, bears have an unbelievable sense of smell. Although I am a firm believer in playing the wind, I also do what I can to reduce my scent by treating my clothing before a hunt and with sent elimination sprays while on the hunt, especially before entering a tree stand.

Black bear hunting is a great opportunity for today’s sportsmen and women. There are many opportunities in different states and in different terrain. Black bears can likely be hunted with the deer rifle, or archery setup you already have at home. The option of both spring and fall seasons opens up options for busy hunters and provides another opportunity to get in the field. Use these tips to help you on your next black bear hunt. 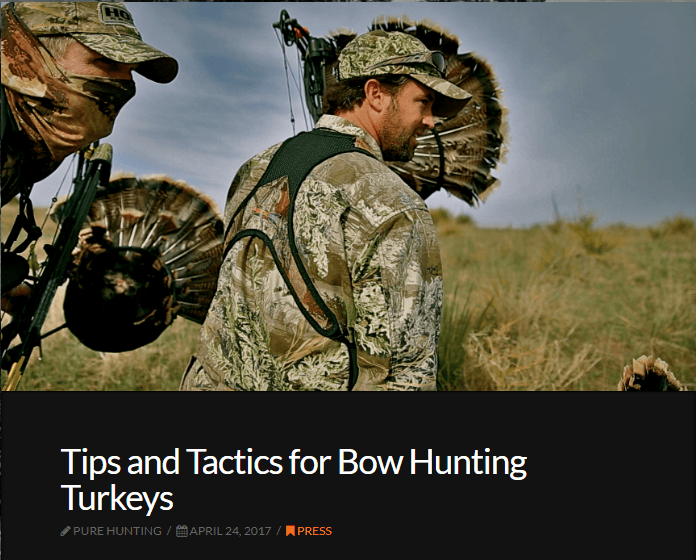